I’m launching the blog with a series of posts on the philosophical doctrine of determinism and its status in various theories in physics. My motivation for this part of the project is to ultimately make some claims about the physical world that are relevant to human action. My thinking along these lines is quite immature, so I won’t expand on it here. Rather, I want to start from as solid a foundation as possible, so I’m looking into our best current theories of the physical world, and asking if determinism holds, and if not, in what way it fails. The first theory in question is classical mechanics. Let’s dig in.
We first need a working definition of determinism. Prior to reading A Primer on Determinism, I held something close to what I’ll call the “standard” definition of determinism, summed up nicely in the Stanford Encyclopedia of Philosophy article:

The world is governed by determinism if and only if, given a specified way things are at a time t, the way things go thereafter is fixed as a matter of natural law.

The article goes on to attempt to clarify conceptual issues surrounding the italicized concepts. The world must refer to the entire universe, basically because no system can be sufficiently causally isolated to prevent outside influences from interrupting a strict causal chain of events. The world is governed by natural laws. Do the natural laws do the governing? That is, are they ontologically primary? I don’t claim to have a great answer, but I’m also not convinced it matters much for my purposes here. The way things are at a time t is obviously a fraught concept considering the lessons of special and general relativity, but only classical mechanics will be treated in this post, so we will accept this concept at face value for now. The way things are at a time t determines the way things go thereafter, but determinism, if it holds, generally holds bi-directionally. The future is of particular concern because of any bearing determinism might have on the question of free will. Placing an emphasis on futuristic determinism is not to deny its time symmetry.
I find the above definition a perfectly sensible one, and I will lean on it in what follows. But I also want to describe an alternative definition that Earman puts forward. The definition turns on the concepts of physical possibility, possible worlds, and worlds generally. The actual world is “the collection of all events that have ever happened, are now happening, or ever will happen”. Possible worlds are different such collections of events that are physically possible, that is, that are still consistent with the natural laws that apply in the actual world. The set of all possible worlds is W. The world W is deterministic if:

for any W’ in W, if W and W’ agree at any time, then they agree for all times.

Like the first definition, this seems intuitively plausible. Earman seems to think this definition is necessary to ward off certain objections to the failure of determinism later down the line. I saw no such necessity; perhaps I’m wrong. I will tentatively move forward with the Stanford definition.
Consider a world governed (or described, if you like) completely by classical mechanics. Is such a world deterministic? Up until recently, I imagined the answer to be an almost obvious yes. After delving into the reference material, my view is very much changed. A few examples will serve to illustrate the ways in which determinism fails in a classical mechanics framework.
The first example involves so-called “space invaders”. Classical mechanics, unlike its relativistic cousins, specifies no upper bound on the velocity of particles. It is at least a conceptual possibility, then, that a particle be continuously accelerated to ever greater velocity. In particular, it is conceptually possible for a particle to be accelerated in such a way that its velocity become arbitrarily high in a finite amount of time, prior to some time t*. The asymptotic nature of such a particle’s worldline means that at t*, the particle literally disappears from the world (the particle having a definite position at t* would limit its velocity prior to t*, a contradiction). Now recall that all laws within classical mechanics are time-reversible. The time reversal of our disappearing particle is a high-velocity particle suddenly appearing, seemingly out of nowhere, after t* – a so-called “space invader”. The possibility of space invaders within classical mechanics is a flagrant violation of determinism. To drive the point home, Earman cites a couple more fleshed out physical systems, involving either infinite collisions among finite particles or an infinite collection of particles, that produce behavior similar or analogous to that of the space invader.
A second example that seems more widely known is Norton’s Dome. The Dome is an axisymmetric mound with a surface that bends away from the apex according to a specific equation. A ball sitting exactly at the top of the dome should do just that – sit at the top of the dome. Much to my surprise, there is actually another solution to the motion of the ball, completely consistent with Newton’s Laws, in which the ball spontaneously rolls down the dome in a single arbitrary direction. It sounds absurd, but there is an intuitive way to understand that this is possible; again, it’s a time reversal. Imagine rolling the ball from the edge of the dome up towards the apex. Because of the precise shape of the dome, it turns out that there is a velocity with which you can roll the ball towards the top such that the ball will arrive there and stop. The time reversal of this motion, is, of course, the completely counterintuitive spontaneous rolling down the hill. Strange stuff.
There are further examples. Collisions involving multiple point particles – classical mechanics does not uniquely determine the absolute angle at which each particle leaves the collision site, only that linear momentum be conserved. Tachyons (hypothetical faster-than-light particles) can undermine uniqueness in solutions to Maxwell’s equations. Instantaneous heat propagation can do the same to solutions of the classical heat equation. I could go on.
Instead, I want to highlight a thread of commonality running through all the examples I encountered. When determinism fails to hold in classical mechanics, the failure will manifest itself as randomness to the observer. Indeed, the failure will be in some sense intrinsically random and arbitrary. Take the space invader. An observer after time t* suddenly experiences a particle appearing from spatial infinity. No information in the universe at t* can enable this observer to predict the space invader’s visit. It appears randomly, arbitrarily, and seemingly uncaused. Norton’s Dome behaves similarly. The ball may slide down the dome at any moment. That it starts sliding at a particular moment is acausal – no reason can be drawn from the physical model of the motion for why the ball starts sliding at one moment and not another. Again, the motion seems random and arbitrary. Three point particles collide simultaneously, all leaving in different directions, with linear momentum conservation satisfied. The directions with which they leave cannot be explained – they seem random and arbitrary.
These observations lead me to my take-away from this first post. All the events in a (hypothetical) world governed by classical mechanics can be grouped into two classes: those which are deterministic in their behavior, and those which aren’t. The indeterministic events are random, arbitrary, and seemingly acausal.

As I write the preceding two sentences, they seem almost tautological. Maybe time will tell. 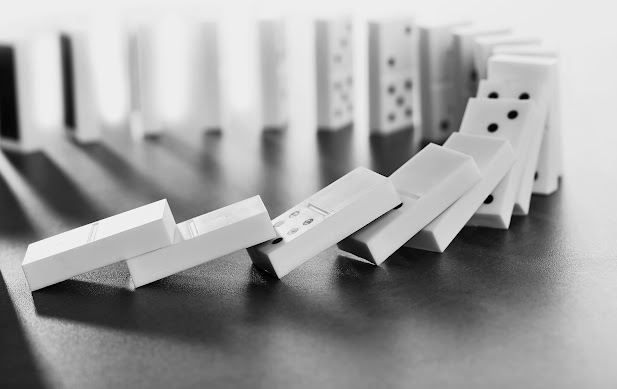